Some time ago (I already had a Garmin Forerunner 305 GPS Watch) I decided to run some ultra-marathon. It's kind of a normal procedure for ultra runners to run longer and climb higher as they pursue their running. Yeah, I would not like to stand out as an exception here. So while I'm still kind of an newbie I managed to finish a 100 mile trail run and even had fun on a 24h run.
So how's this related to the topic and why is it bad I now have the 910XT?
For an (average) ultra runner the main disadvantage of the FR305 and many other GPS enabled watches is their battery life. The FR305 offers 10h (on mine it lasted 13.5h once!) according to the specification. The longest battery life you can get from current Garmin Forerunner devices is about 20 hours (310XT and 910XT). Now SUUNTO claims 50h GPS (with one minute GPS data recording intervall) with its Ambit. AFAIK Polar does not have watches with integrated GPS but rather use external GPS sensor (like some of the other Suunto watches). This is usually good because those external sensor devices have replaceable batteries. It looks most of them lasts for about 10h. I do not know much details about how they record the GPS track and if the track recording continues after replacing the battery. For one of the older Suunto GPS pods I read that it is not intended to get the GPS data out of the device (easily).

So having said all this I may introduce my little project I started about a year ago and which has not really evolved that much since than. 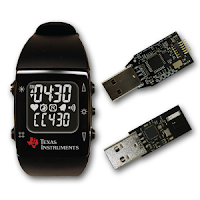 A Texas Instruments MSP430 development kit called TI Chronos-eZ430 was released late 2010 for 50 EUR. This device features on-board 3-axis accelerometer, pressure sensor, temperature sensor, battery voltage sensor, and wireless transceiver.
Besides this hardware features the watch can be full (re-) programmed with your own firmware. One actively maintained firmware project, based on TIs original Sportswatch firmware, is OpenChronos. To compile code under Linux you need to install the msp430-gcc cross compiler.


So what to do with this watch?

I wanted to build my own ultra-trail-running-watch. These are some of the requirements on such a watch:
Additional hardware I purchased in order to built such ultra watch:

So to at least answer the question why the 910XT buy wasn't so good is that I now have even less motivation (and still no time) to continue building my own watch. But I will definitely continue on this with low priority.

Links to gitorious repositories for chronos and amber code: